On arriving at work on Yell I immediately saw a Willow Warbler, and that made me wonder whether I should have stayed on Unst! By midday there had been very little news so I was beginning to think that it hadn't been such a bad move to be working. That all changed early afternoon when John Lowrie Irvine sent a message accompanied by a gripping image to say that his Uncle, Allister Irvine, had seen a Great Shearwater sat on the sea with a Sooty Shearwater and Fulmars a mile north of Skaw! I still had a few hours to complete on Yell but on arriving back on Unst I ran into Brydon who told me that there was a large trawler, the Scotia, off Haroldswick being trailed by hundreds of Gannets that must be worth a look... We were soon there and whilst scanning the trailing flock of birds I quickly picked out a Sooty that Brydon was soon watching... before he was suddenly shouting... Great, Great, Great!! The Great Shearwater was trailing further behind but soon splashed down before quickly taking to the air again following the trawler and splashing down again that it repeated several times... Amazing good fortune on our part for such a large trawler to be dragging its nets so close to shore at exactly the right time for us! Robbie later tracked the Scotia had previously been fishing well to the west of Shetland. 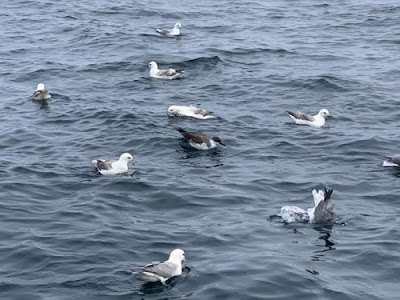 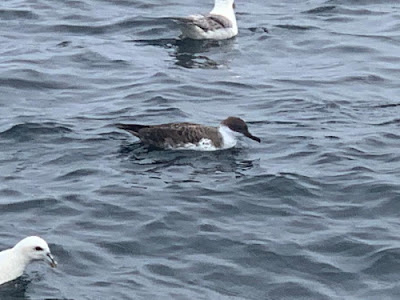 Great Shearwater off Skaw (Allister Irvine)
We were very grateful for the quick thinking of both Allister and John in putting the news out. It was only the second time I've seen Great Shearwater off Unst the first being the memorable day when 5 passed Lamba Ness on the 10th September 2007 and coincidentally that was the first time that I ever met Brydon!
Posted by Hegura at 14:10
Labels: Lamba Ness
Newer Post Older Post Home