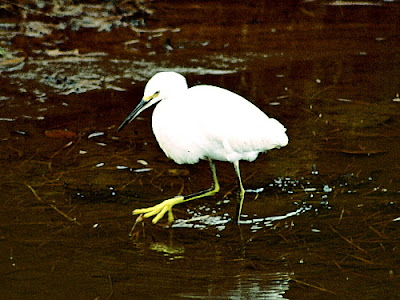 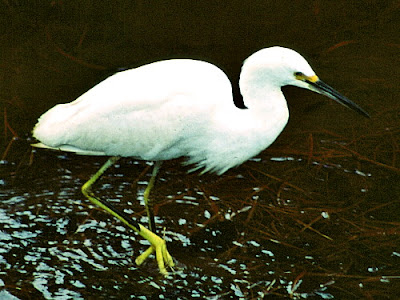 Snowy Egret on Isle of Arran
On returning from Chile in November 2001 our arrival was mistimed as RJF & JWK were making their long trek north to Seil Island to see the UK's first Snowy Egret that very day. However, there was Minsmere's Baikal Teal to catch up with, and as the Snowy Egret had been present for a while, there seemed every chance it would linger for the following weekend... that of course, it didn't! I then returned to South America but again mistimed my return from Ecuador to the UK as the Snowy Egret had been relocated at Ardrossan allowing JFC & DRC to see it on New Year's Day. However, there was now the Norfolk Ross's Goose to catch up with, and the small matter of a return to work, and it again seemed likely that the Snowy Egret would linger for the following weekend... that of course, it didn't! After over a month of being missing, it was again relocated, but this time on the Isle of Arran. Fortunately there was a Calmac Ferry that docked nearby, so along with JFC, we took the plunge and travelled as foot passengers, and after an anxious walk found the Egret feeding in its favoured stream showing to a few feet. We then enjoyed watching this first for Britain & Ireland all by ourselves for a couple of hours before returning on the afternoon ferry to the mainland.
﻿