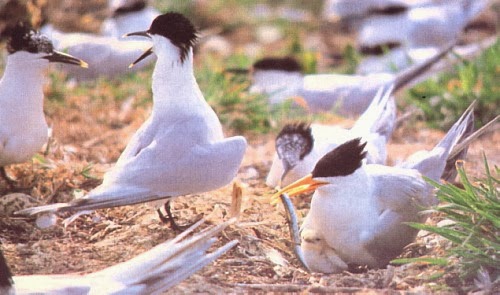 Lesser Crested Tern on the Farnes (M. Cottam)
We first saw Elsie whilst watching a live natural history television programme when we could hardly believe our eyes! It wasn't until several years later that I accompanied Richard Kelly on the long overnight drive and slept under the car initially enjoying the heat from the exhaust pipe. We joined an organised Billy Shiels boat load of twitchers from Seahouses and viewed the colony of Terns on Brownsman Island whilst anchored offshore.
﻿
Posted by Hegura at 14:26
Newer Posts Older Posts Home
Subscribe to: Posts (Atom)