A long day working on Yell where I had little time to look for migrants seeing just a Fieldfare and a few Phylloscs. On returning home to Unst an evening walk produced a Slavonian Grebe, a Robin, 2 Pied Flycatchers, a Song Thrush, 3 White Wagtails, the Lesser Whitethroat, a Blackcap, 2 Willow Warblers, 3 Chiffchaffs and a Mealy Redpoll. 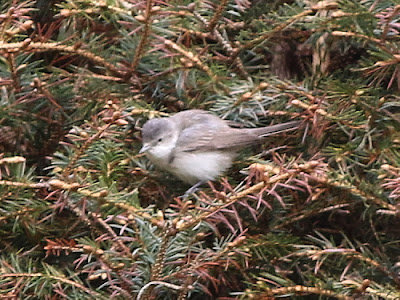 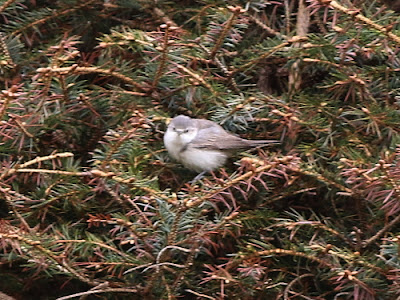 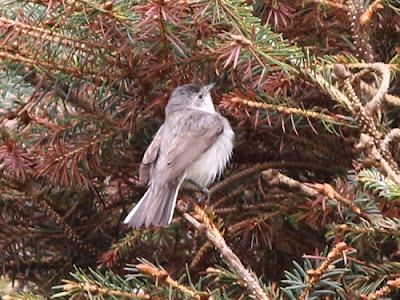 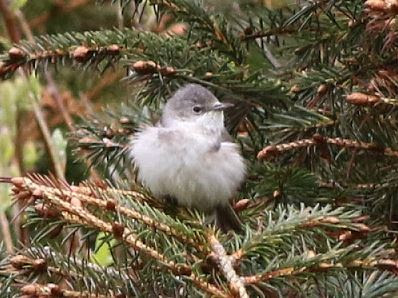 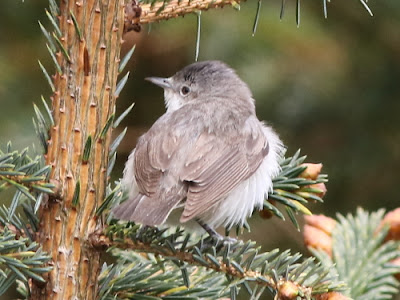 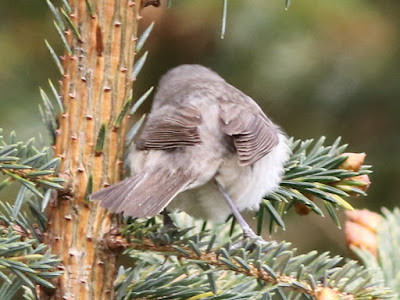 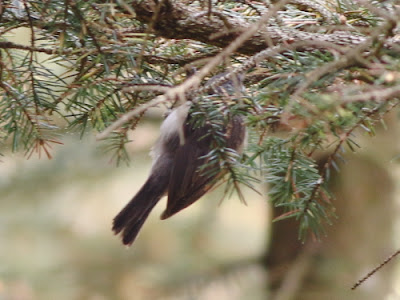 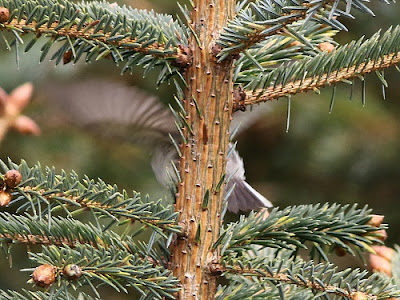 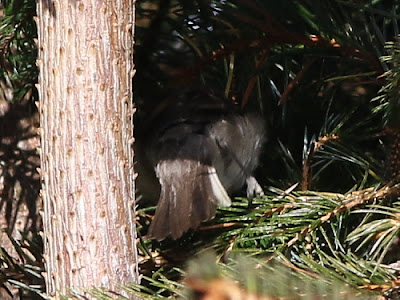 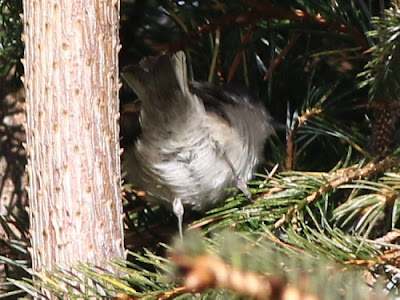 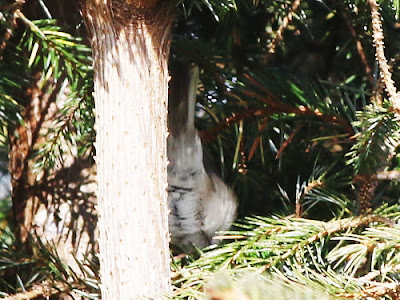 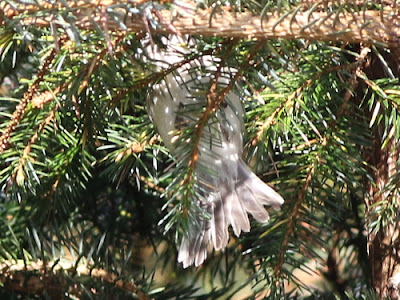 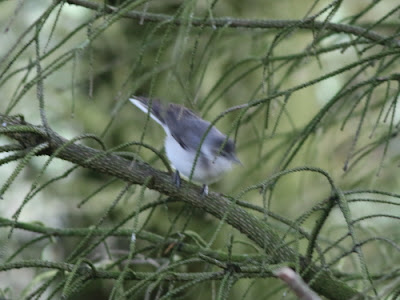 First-summer Lesser Whitethroat at Norwick
On Friday, based on my somewhat distant and brief views near the top of a small pine I initially completely misjudged my size assessment of this bird and promptly misidentified it as a first-summer Barred Warbler. I then saw some interesting tail movements including the tail being waved horizontally, cocked and then fanned as it was moved downwards and I half-considered the possibility of it not being a Sylvia at all, but soon saw its bill, that put my mind at rest. I moved closer but as I waited hoping it would appear, it flew out of the back of the pine and towards a thickly vegetated garden, and it was only then that it appeared smaller. I never saw it again. A quick look through the literature and a discussion with Brydon who has experience of seeing the fanciful tail-waving species abroad none seemed to truly behave in the same manner, and in fact, when I checked through my images I considered that a first-summer Barred Warbler actually seemed a good fit - wrong! On uploading images to my blog Paul French queried its identification as a Barred Warbler considering it most-likely a Lesser Whitethroat. Brydon & JFC shared Paul's misgivings so we returned on Saturday and relocated it around midday but now proving very elusive in a small pine plantation. Whilst our views were brief, it now looked the size of a Lesser Whitethroat but its rather featureless appearance didn't remind me of one and it was still moving its tail that Brenda considered its most-diagnostic feature 'wave, flick and fan' usually whilst face down poking around a pine bud. With the bird rarely in view Brenda decided to leave, but I persisted with it, in the hope of obtaining more images. More frustrating views of it usually deep within the pines but I was getting ever-more interested in it still regular tail-movements, it feeding in a Tit-like manner hanging from the underside of the pine branches and what I considered was its unfamiliar appearance. Finally I managed to obtain a couple of images of it out in the open. I dashed home, no reply from Brydon or Robbie and I'd missed Mike literally by a minute - Margaret though he might still be in earshot but that wasn't the case. Fortunately the ever-reliable JFC, Paul Harvey & Roger Riddington were on hand to spare my further blushes with Roger & Paul both independently conclusively identifying it as a Lesser Whitethroat in a matter of minutes based on its visible wing-formula - sheer brilliance. We returned this evening and managed a few more typically brief views and images. Whilst most of the images included are not of great quality, hopefully when viewed together, they help convey and document this interesting bird's appearance... As always, very many thanks to all those who commented upon, discussed and resolved the identification.

What an odd bird. First of all, I think it’s worth saying that, despite it’s odd appearance in comparison with other Lesser Whitethroats (I have never seen a bird like this), I don’t see anything here to suggest anything other than curruca.

First of all, I agree with your ageing of the bird as a 2CY (“first-summer”). As I suspect you might have noticed already, the bird’s flight feathers are overall rather worn, particularly the primary tips and the tertials. The central tail, too, is OK for juvenile tail feathers (the degree of wear varies considerably between individuals). It’s a little harder to make out what else is happening with the tail (the outer tail feathers, for example, seem rather white and I suspect may have been replaced at some point) but I don’t see feathers that strike me as brand new pre-breeding feathers at least. Indeed, I don’t see any pre-breeding feathers at all. Typically, most or all tertials are moulted on the wintering grounds before spring migrations, and it’s very rare to see such worn tertials in spring. On first viewing the photos I wondered if this bird could be showing some sort of plumage aberration with e.g. one of the two melanins that birds possess missing. However, I don’t think that’s the case. I think the clue to this bird’s condition may come from the body feathers – the mantle and scapular feathers show small white streaks. There are typical at the base of the feather in Lesser Whitethroat but would ordinarily be covered by the overlapping feathers. Furthermore, in the one photo where we can assess the mantle feathers more closely, they are rather narrow and v-shaped, in some cases almost concave. This suggests that they are heavily worn. So heavily worn, in fact, that the areas of the underlying feathers that are usually covered by overlaying feathers are becoming visible. All of the head and body feathers, including the mantle and scapulars, would ordinarily be moulted in the pre-breeding moult before spring migration along with the above-mentioned tertials and usually some tail feathers. That this bird shows such worn body feathers and no signs of winter/spring-moulted feathers in the wing strongly implies to me that this bird hasn’t undergone its normal pre-breeding moult. Essentially, if that’s correct, what you’re seeing is a very worn individual. I’ve never seen or heard of this before, so it’s certainly not a common thing in Lesser Whitethroats.

Regarding the species, which I realise I didn’t say much about, the bird certainly has an air of something good about it. However, unless we’re all missing something blindingly obvious, every other species can be ruled out by a combination of orbital ring colouration, tail pattern, and/or wing formula. The best fit, no matter what you try and do with it, ends up being LW. The eye in most of the photos looks disconcertingly dark, but I suspect this is light conditions/photograph resolution.

Hope this helps a little in unravelling the mystery.
Posted by Hegura at 17:43
Newer Post Older Post Home