A pre-dawn arrival at the Hilltop Chalet for our final dawn at Lambir Hills NP failed to produce the dream result. Undeterred I set off along the Innoue Trail for the final time. I'd walked less than 500m when I heard a Garnet Pitta calling - they were still present in the National Park! It sounded a fair way off but I decided to go in to try to see it. I hadn't gone far and I reached a wet ravine that looked ideal. I tried playback and the Pitta continued to call. I made my way closer and tried playback again. The Pitta now seemed incredibly close that I convinced myself I could even hear it draw breath before calling! Frustratingly, I still couldn't see it. It then sounded like the call was coming from behind me so I moved in pursuit, again approaching it closely. A few drops of rain became a shower but the Pitta remained calling. Over the next 4 hours it continually called. In that time it had led me back across the trail into the forest on the other side, down a deeper ravine, up a hill crossing back over the trail, down a steeper slope, back up and into a hollow the other side. I still hadn't seen it, not even a briefest of glimpses. I'd tried looking on the ground, at eye-level and even higher in the trees. I was finding it difficult to pinpoint its monotone whistled call but surely it shouldn't be this difficult! I climbed a slope and found a narrow trail along a ridgetop. I walked the ridgetop scanning the ravine from where the Pitta was now calling but saw nothing. I was beginning to wonder whether it was a Pitta at all - how could I not see it! A small passerine then flitted ahead of me along the ridgetop and there was a superb male Grey-chested Jungle-Flycatcher. As it flicked away, I turned to return along the ridgetop to the main trail and I saw a Rufous-tailed Shama - I knew that some species of Shama were great mimics and it crossed my mind whether I'd been listening to the Shama mimicking the call of a Garnet Pitta for over 4 hours? It was now 12.30pm, checkout had been 11am and I knew that by now Brenda was probably wondering whether I would ever return! I decided I'd better give-up, I put away my recorder and set off along the ridgetop. I'd only walked a few steps, saw a bird fly a short way ahead of me and thought 'that looks like the Pitta', raised my bins, and there was a stunning Garnet Pitta sat at eye-level. Absolutely mind-blowing! I'd only got Brenda's bridge camera with me and I barely knew how to switch it on. I therefore decided to just watch it. It flew to another low perch and then again. It didn't seem overly shy. It started to preen so I then grabbed the camera and successfully switched it on. The first couple of images were tiny dots as I couldn't remember how to zoom-in. I eventually sussed it and the Pitta continued to oblige around me. It eventually dropped to the ground and began hopping away. I could have pursued it but I didn't feel the need. I headed for the trail, still listening to it as I'd done for nearly 5 hours, but now feeling on a complete high! It's amazing how a single bird can completely transform your perception of a place - I'd gambled on squeezing in a visit to Lambir Hills NP based on scant information and it had now paid off handsomely. Brenda greeted me excited to tell me that she'd seen a flock of 8 Roulrouls that had included a couple of males drinking alongside the Hilltop chalet - fortunately something I'd seen a few times with JFC. It was time to leave and we asked whether the cook knew of anyone who would give us a lift. She volunteered her husband and we were soon on our way. We arrived at the Jinhold Hotel situated opposite the Miri airport and checked-in. 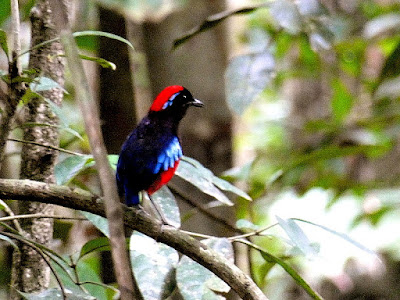 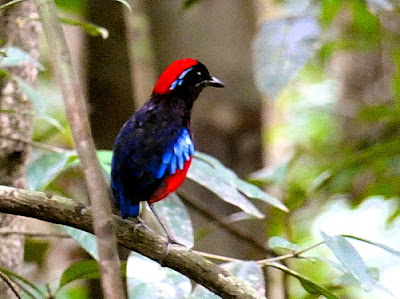 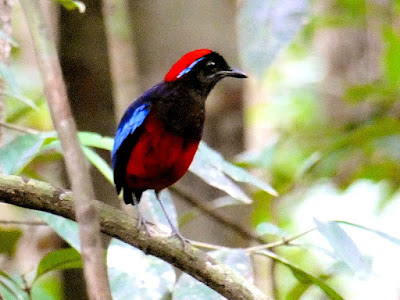 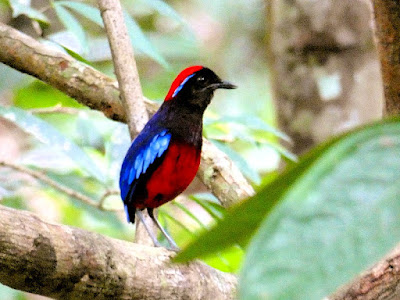