Since arriving home there's been a slight increase in the number of Whooper Swans on both islands with the species more scattered on various lochs now. The female Pintail has remained around Uyeasound being seen on Easter Loch. We counted over 100 Long-tailed Ducks on Belmont loch during the WeBs count and I saw c.400 flying around Bluemull Sound today. I saw my first pair of Red-throated Divers back on territory today with now good numbers in Bluemull Sound and various voes including some still in juvenile plumage and a few Great Northern Divers remain on Bluemull. A flock of 3 Herons were seen flying over Snarravoe today and there's regularly been one at Haroldswick pool. My highlight since getting back was a male Hen Harrier seen flying east over the Windhouse bod on Yell today. A Water Rail showed well on a lawn at Uyeasound. Oystercatchers are now everywhere, some displaying and a pair seen copulating today. An obvious increase in Golden Plover too with several large flocks seen throughout Unst now. Also, the largest numbers of Lapwings are on the islands that we've seen since living here presumably cold-weather refugees that arrived whilst we were away. Some Curlews have commenced displaying with others still forming large flocks. Numbers of Black-headed Gulls have increased and the first pair are back on territory at Norwick. Flocks of Common Gulls are now widespread and there are a few Lesser Black-backed Gulls. A juvenile Iceland Gull was present on Easter Loch a couple of days ago and again present there today. A couple of Wood Pigeons are back at Norwick and Skylarks have returned in numbers - I hadn't seen any before leaving in February - whereas flocks of up to 30 are now widespread. There's a good scatter of both Fieldfare and Redwings, a couple of Song Thrushes and we've seen Mistle Thrushes at Norwick, Saxa Vord and 2 at Burrafirth beach. Robbie found a female Stonechat at Burrafirth a couple of days ago that we saw there today and the Dunnock continues in residence at Valyie. We've seen up to 6 Snow Buntings at Norwick beach, 1 at Westing beach and 4 flew over our house today. 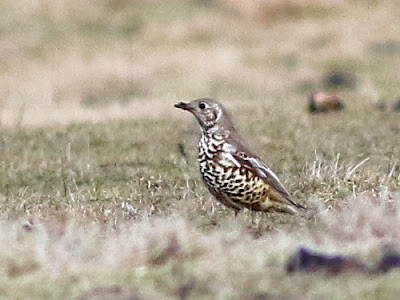 Mistle Thrush at Saxa Vord
Having found a White's and seen 2 Siberian Thrushes it was nice to add Mistle Thrush to my island list! 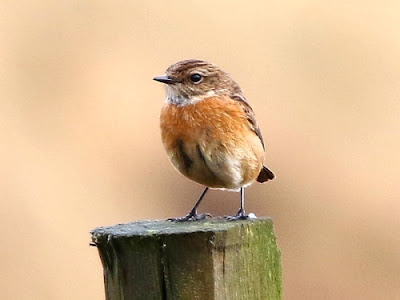 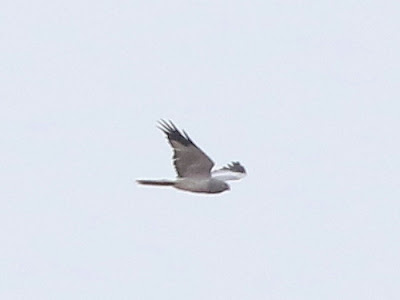 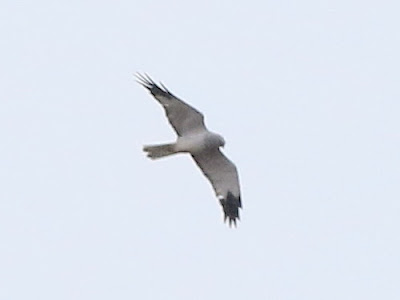 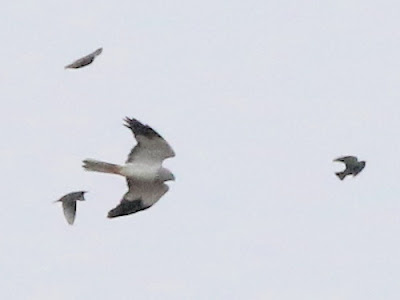 Male Hen Harrier at the Windhouse bod, Yell
Posted by Hegura at 14:09