A quick look at Norwick produced a surprise 2 Reed Buntings. At Haroldswick the Glossy Ibis was still at the old church and the Moorhen was still on the pool. The Black-throated Diver and 17 Common Scoter were still off Uyeasound and there were 2 Purple Sandpipers present. A Sparrowhawk was seen chasing a Blackbird at Ungirsta. 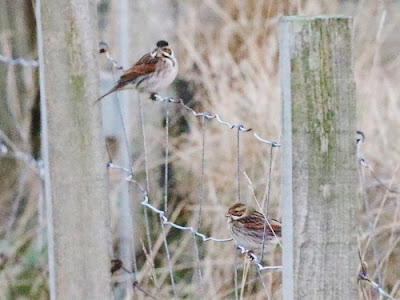 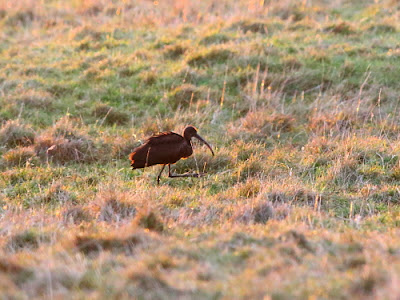 Glossy Ibis in the early morning sunshine at Haroldswick 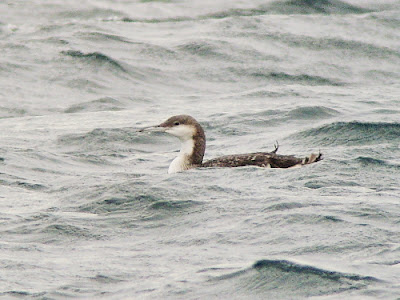 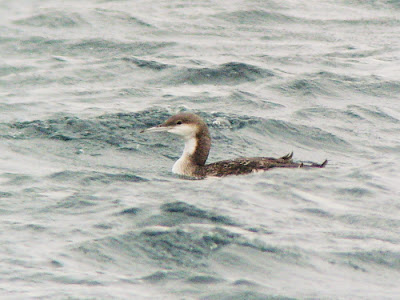 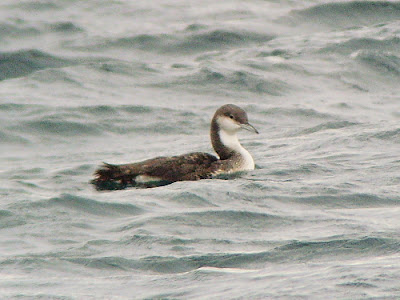 Whilst walking the burn at Skaw I flushed 4 or 5 Woodcock and I saw a Great Northern Diver, 25 Redwings and 10 Chaffinches at Norwick and 77 Teal and a Glaucous Gull at Burrafirth. 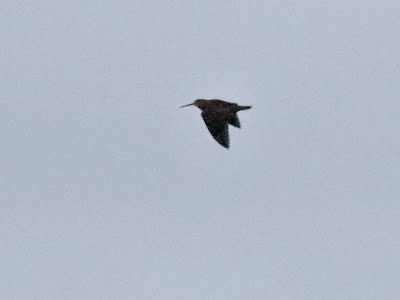 Woodcock at Skaw
Posted by Hegura at 13:23

A single Grey Plover was seen in fields at Uyeasound and a flock of 5 Blue Tits were at Buness.

A beautifully calm morning. As I headed to Burrafirth I saw the Glossy Ibis still in a field near the old kirk in Haroldswick but couldn't stop as I had a car on my tail - there were 10 Goldeneye on the loch and 2 Glaucous Gulls on the beach. We then drove south to Uyeasound where the calm seas were playing host to 9 Red-throated Divers, a Black-throated Diver, 10 Great Northern Divers, 18 Common Scoter and 710 Long-tailed Ducks. 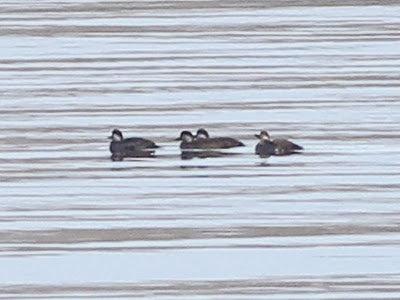 Common Scoter off Uyeasound
Since living on Shetland my previous largest flock of the species was just 4 so 18 this afternoon was a surprise! All were juveniles or females. 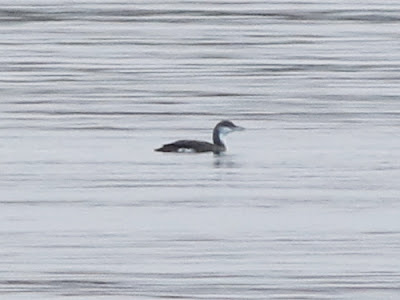 Black-throated Diver off Uyeasound
My digiscoping camera's battery died on firing it up - no surprise having not recharged it since last Winter. But, it's amazing what detail a DSLR can capture even at great range. Note the bill shape, foreneck/hindneck contrast, blackness of its upperparts and white flank patch. 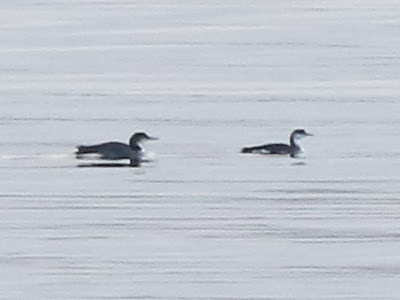 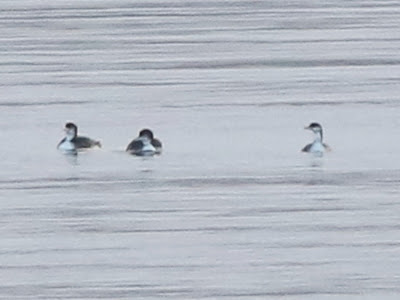 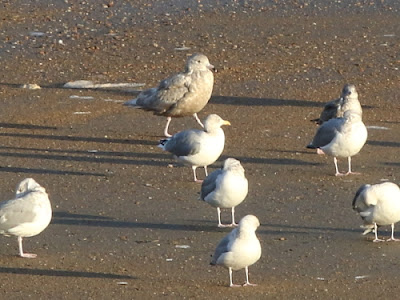 Brydon re-found the Glossy Ibis that he'd found yesterday morning shortly after I'd disembarked from the ferry at Gutcher! It showed well foraging beside a stream adjacent to Clingera. 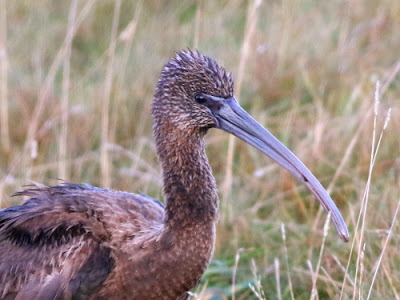 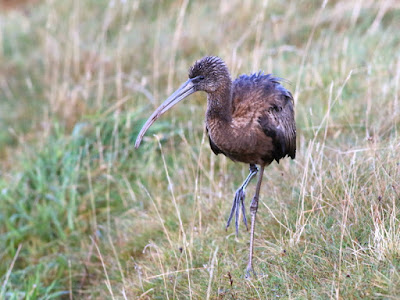 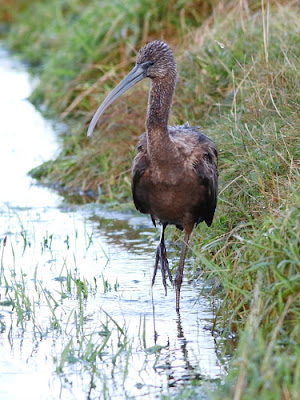 Glossy Ibis at Clingera
the first that I've seen on Unst
Posted by Hegura at 11:19

Ten days ago Mike saw some hybrid Geese way in the distance on the far side of Loch of Snarravoe. Whilst driving past Belmont dashing for the ferry to Yell there was a roadside flock of Greylags and a quick scan revealed the presence of a Barnacle Goose and 3 hybrids. Only having a bridge camera at my disposal I quickly rattled off a few images and successfully caught the ferry! 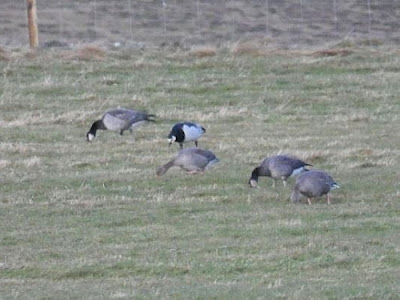 Barnacle Goose, Greylag Geese and 2 hybrid presumed Barnacle x Greylags
The left hybrid almost resembled a Cackling/Canada x Barnacle hybrid but showed some pale pink on its bill and legs. The right hybrid was larger showed far more pink on its bill and very pale ivory-coloured legs closer to the anticipated appearance of a Barnacle x Greylag hybrid being closer in resemblance to a Canada x Greylag hybrids. 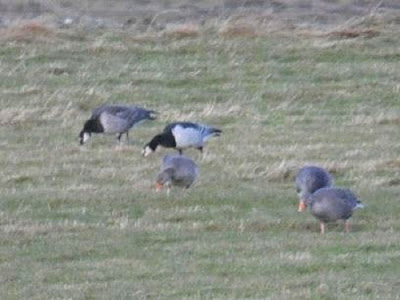 Barnacle Goose, Greylag Geese and hybrid presumed Barnacle x Greylag
The 'left hybrid' from the previous image that superficially resembles a 'small' Canada being not much larger than the accompanying Barnacle Goose but note its white forehead and dark breast signalling Barnacle Goose being one of its parents. 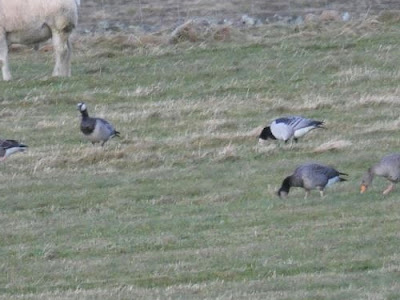 Barnacle Goose, Greylag Geese and 2 hybrid presumed Barnacle x Greylag
The 'left hybrid' from the previous images showing its extensive black breast to better effect. I found a hybrid Cackling/Canada x Barnacle Goose hybrid in the Cuckmere many years ago that was similar in both size and appearance although it showed an all-black bill and black legs. 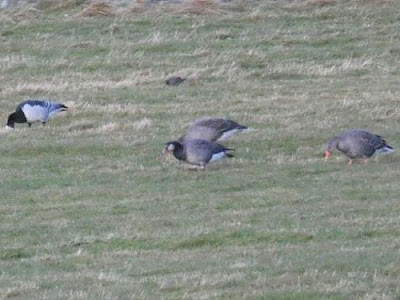 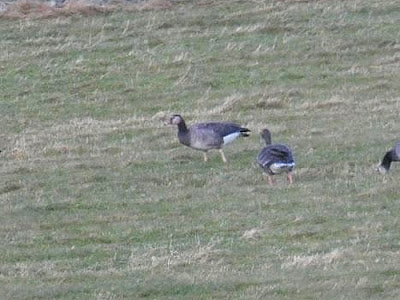 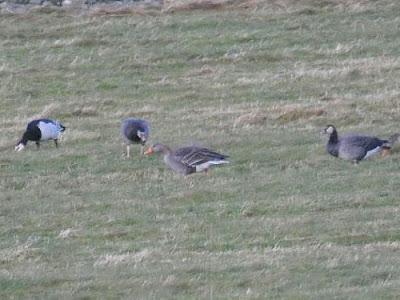