Skaw proved very quiet with just a single high-flying Lapland Bunting heard as we left. Another couple of Lapland Buntings were then heard over Millfield. Norwick produced my first Brambling and second Dunnock of the Autumn but little else. Paul French then kindly let us know that he had found a Blyth's Reed Warbler at Uyeasound but it had disappeared. We took a chance and wasted a fair amount of time looking in the wrong area - our mistake looking south rather than west of the hostel per Paul's directions - but then we had a break of luck as the owner of a croft out walking stopped to tell us that there had been a rare bird in her garden this morning. We asked if she minded us taking a look and we obtained several brief views of the Blyth's Reed Warbler keeping low in some sycamores but it proved incredibly shy and the windy conditions didn't help. There was also a Willow Warbler and a Yellow-browed Warbler in the sycamores. 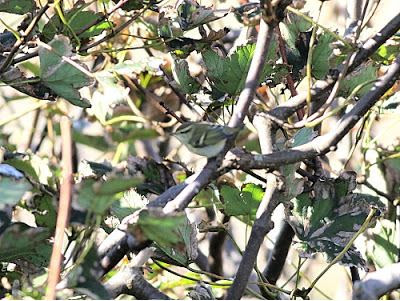 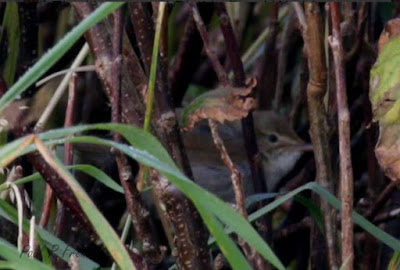 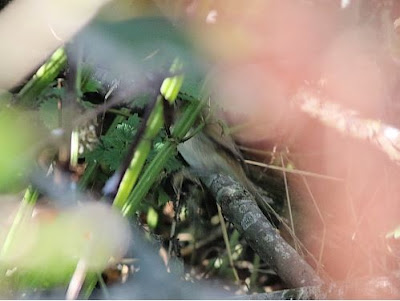 Blyth's Reed Warbler at Uyeasound
If only it had sat still for another second! Despite qualifying as one of the worst ever images of a BRW it does just about show its very short wings, greyish underparts and bronze-olive wings.
Posted by Hegura at 12:09