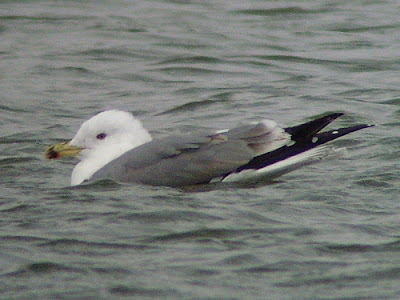 Third-winter Yellow-legged Gull at West Rise Marsh
This tiny-sized (so presumably a female), dainty, round-eyed third-winter is surely as beautiful as they come and almost reminiscent of Black-tailed Gull Larus crassirostris. It is interesting to compare its deeper, blunt bill and more angular headshape with the Caspian Gull below. Whilst adult-like it is readily aged by its dark subterminal band to its bill, dark markings on its tertials and smaller white tips to its primaries. 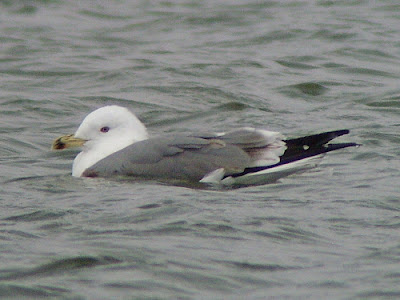 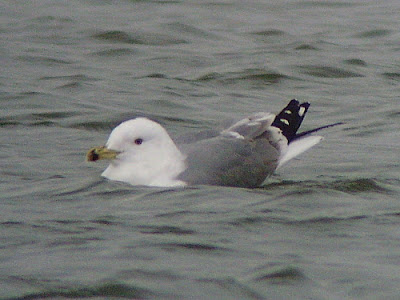 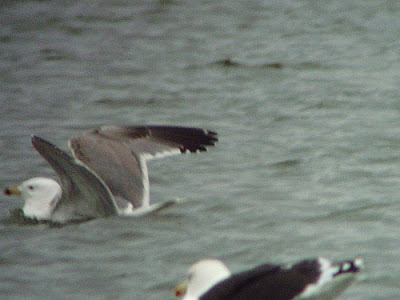 With its wings spread its age is further confirmed by its dark primary coverts and much smaller white mirror on p10. In this respect it is interesting to compare with the spread wing of the adult below.﻿ 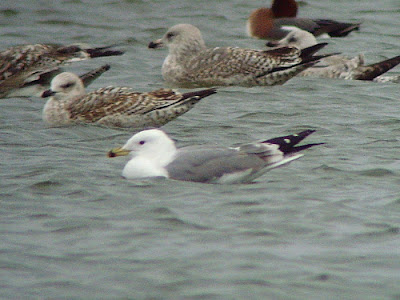 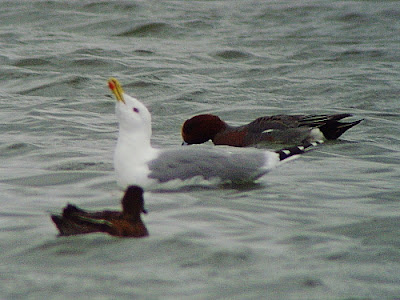 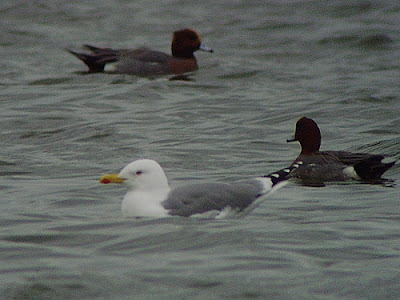 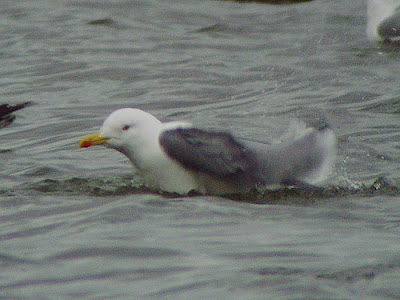 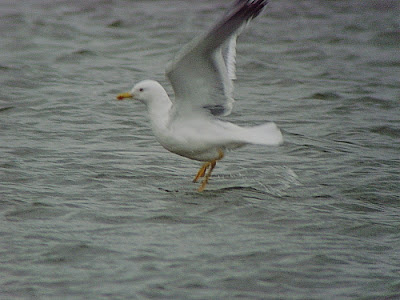 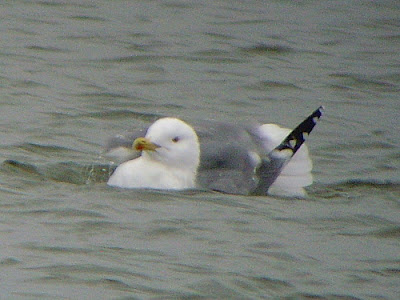 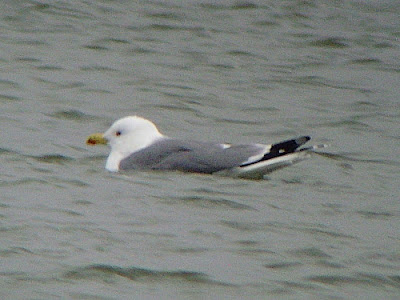 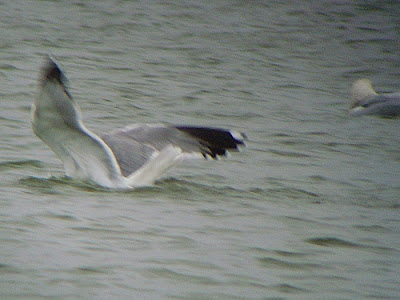 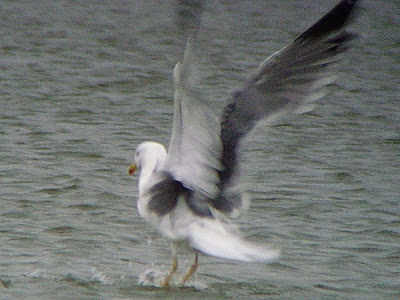 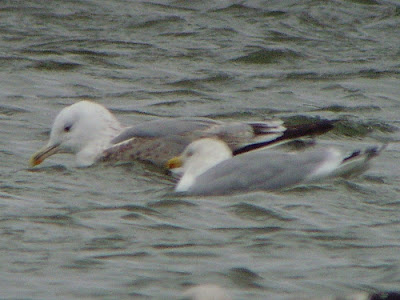 Third-winter Caspian Gull at West Rise Marsh
Whilst scanning the flock of Gulls this bird was initially noticed by virtue of its strikingly large size (so presumably a male) that literally dwarfed some of the accompanying argenteus, its snowy white-headed appearance, small dark eye, long insipid-coloured bill and by its mantle being a shade darker than the accompanying argenteus, although not as dark as any of the three michahellis present ,and lacking the bluish cast of those individuals. 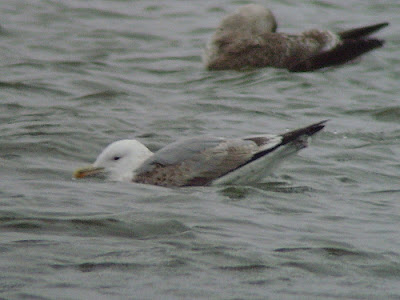 It immediately conveyed a snouty appearance by virtue of its long sloping forehead, extensive white loral area and long, slender, parallel-sided bill complete with 'large Albatross' dark line running along its cutting edge. Despite being on the water, the very obvious ventral bulge (only just visible here but readily seen whilst it splashed around) was surprisingly one of the initial eye-catching features that drew attention to this individual. 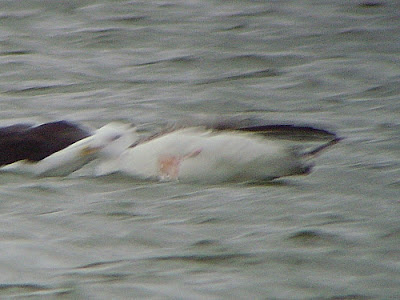 Whilst bathing it revealed its full-bodied appearance and its ventral bulge can again be appreciated. Both its legs and feet can be seen to be pale pink. 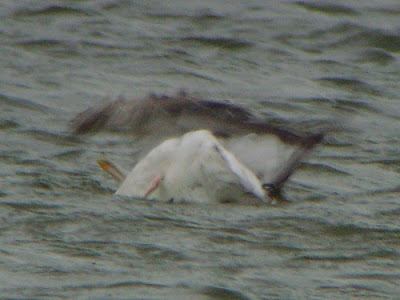 For such a large-sized Gull its pale pink legs were very thin and weak-looking. 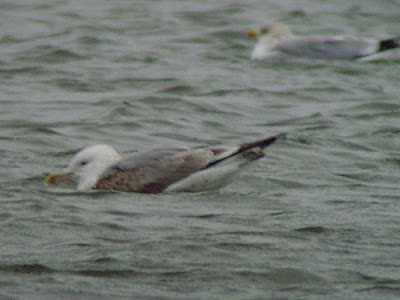 Even whilst facing slightly away, it was still possible to appreciate its long tapering bill. Its rear end was very attenuated by virtue of its flack back, complete lack of a tertial step and long wings. This image also shows tip of its tail falling less than halfway along the length of its exposed long-looking primaries. 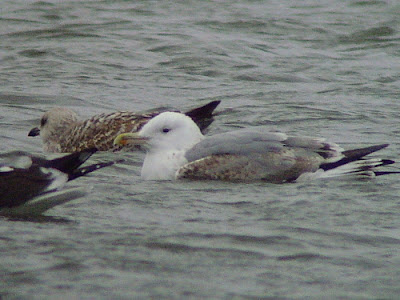 Its pure adult-like grey mantle and scapulars are a result of it having recently undergone its second complete moult that is undertaken by Caspian Gull during the summer and autumn of the third calendar year. Reassuringly, third-winter Caspian Gulls retain variable amounts of brown in the tertials and coverts, especially the lesser coverts. In addition to the odd hindneck streak, the odd upper-breast side spot was also just visible (as in the above image), all of which helpfully added to its 'distinctive look' of a Caspian Gull. 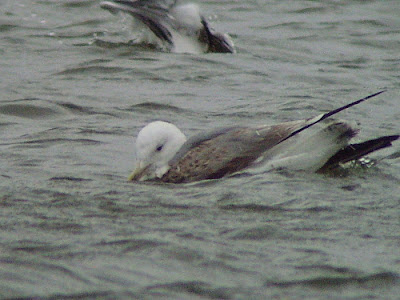 Whilst raising its tail, this image neatly captures its rather obvious vestigal tail band made up of isolated black spots. Whilst such a tail band also occurs in michahellis (as shown to a lesser extent by the 3w michahellis above) it is very rare in 3w Herring Gulls (Gibbins et al. BB March 2010). 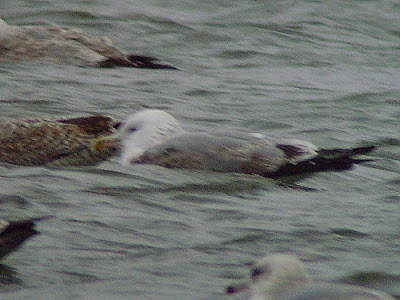 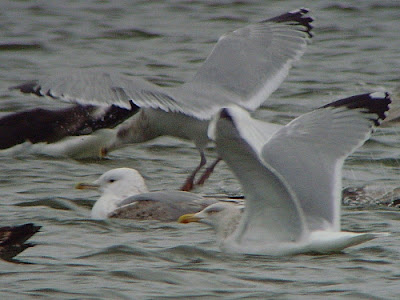 Whilst large-headed it often still appeared distinctively pear-shaped. It is interesting to compare the profile of its forehead, crown and nape with those of the 3w michahellis above. The differences in both the structure and the brightness of the bill colouration are also striking. The legs of the accompanying argenteus were noticeably deeper pink and more robust. 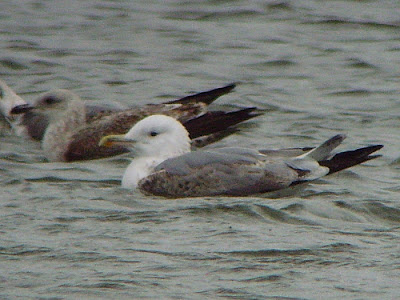 Despite being a such a large-sized individual this image best portrays the limited extent of its gonydeal angle limited to just an indistinct bulge. For cachinans the bill is most often more than twice as long as its maximum depth, while for Herring it is most frequently a little less than twice its maximum depth (Gibbins et al. BB March 2010). It is interesting to note the strong similarity of the bill structure, insipid dull greeny-yellow colouration and pattern including the black cutting edge and extent of the restricted orangey patch confined to the gonys with the third-winter Caspian Gull portrayed in Plate 81.
Posted by Hegura at 10:29