It was nice to awake to a calm dawn after a couple of very windy days. There was a Blackcap in our garden and a Reed Warbler on the drive to Skaw. Burrafirth added a Long-tailed Duck on the Loch of Cliff and a Willow Warbler. A walk around Norwick produced just the Kestrel and the Stonechat so I decided to try and emulate Patrick & Hannah's success at finding 2 Buff-breasted Sandpipers on Bryher yesterday by walking a few headlands. I returned to Skaw and whilst watching a House Martin I heard the familiar call of Lapland Buntings overhead. Looking skywards I started to check an approaching flock of passerines to see how many were Buntings... the first, second and then third and fourth... it took me by surprise, so a few moments, before I realised that all 19 were Lapland Buntings! They flew off strongly out to sea heading northeast until being lost to view. On walking towards the first headland I then inadvertently flushed a flock of 14 Lapland Buntings that landed once, but as I approached again, they then flew off high inland. There was then an approachable singleton at the tip of the next headland, and then singles at the next two headlands before a nice quartet on the edge of Gorsun geo. Next up was a flock of 5 on a heathery hillside and then another singleton overflew. I headed for Lamba Ness hopeful of more so it was no surprise to quickly find a flock of 5 but then something of a disappointment to add just another 2 singletons albeit I was passed by a campervan whose driver proceeded to walk the entire tip of the Ness and in doing so may have inadvertently flushed any Lapland Buntings before I arrived there. 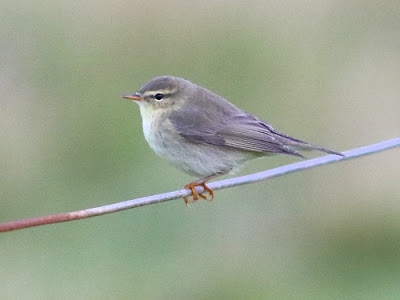 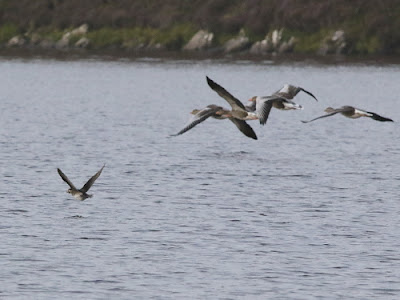 Long-tailed Duck and Greylags at Loch of Cliff 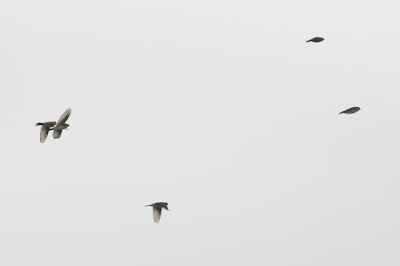 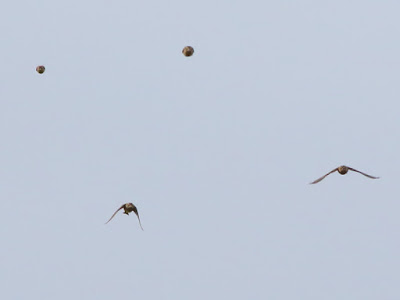 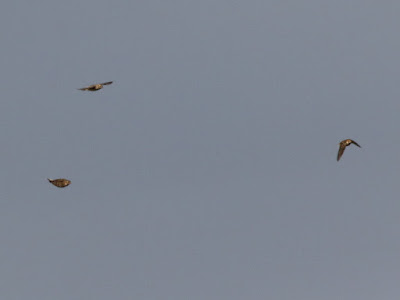 Lapland Buntings northeast Unst
Mike kindly brought it to my attention what a decent arrival the 53 seen today represents as prior to 2010 the only previous double-figure counts had come from Fair Isle, Foula or Out Skerries and the highest ever count away from Fair Isle was just 35 (on Foula in 2005). Are we in for a repeat of the big influx year of 2010 when early in September notable counts on Unst included 9 on Hermaness on 5th, and a flock which peaked at 40 at Lamba Ness on 15th-16th. Numbers increased even further from late September to mid-October when birds were particularly common and widespread with a peak on 2nd-3rd October when there were up to 60 at Uyeasound, 40 at Norwick, 40 at Baltasound and 30 at Haroldswick, and there were 60 still at Skaw on 15th. Most had moved on by late October although there were 12 at Haroldswick on 23rd October and a few later scattered records of 1-2 until the last record of 2 at Baltasound on 29th November. 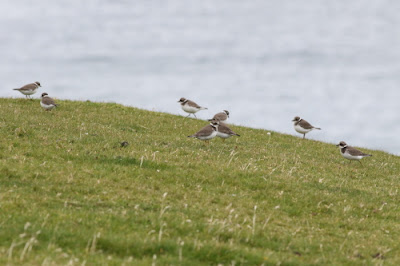 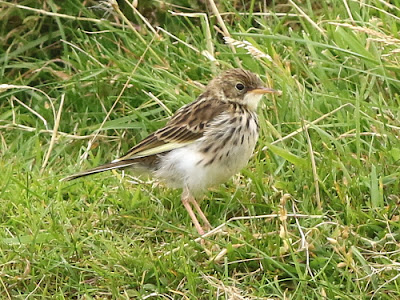 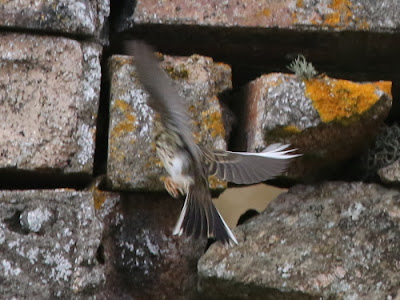