We awoke to grey skies and light rain. We drove to Mashpi Chocolate Farm and Danielo arrived on his motorbike and proceeded to catch a few Grasshoppers. It was raining quite heavily but we started off along the forest trail climbing to the ridge. It was dark, dank and misty inside the dripping forest and there was very little bird activity, in fact, we reached the ridge-top without seeing a single bird! Danielo started imitating the call of Rufous-crowned Pittasoma but there was no response. Probably  around 15 minutes elapsed and it was beginning to look a lost cause. Suddenly, the bird called back, just the once, but it sounded a long way away - probably a good 200m or so. Danielo didn't seem too excited and it seemed too far off for us to try and work our way towards it through the thick vegetation. Danielo occasionally continued to imitate it and suddenly there was a completely different call that immediately caused Danielo to excitedly exclaim 'Pittasoma!'. It sounded like from right behind the closest thick tree trunk. There were no further calls for what seemed like an eternity but I eventually saw a movement, and there it was, it had hopped into view just right of the trunk and was stood there surveying the scene. Stunning! Danielo tossed it a Grasshopper but it didn't seem interested and soon hopped away out of sight behind the tree trunk. Whilst thrilled to have seen it, we wanted longer views. Whilst Danielo explained that he thought the show was over, he was content to wait a while as we were keen to do so. Probably another 5 minutes passed and I saw another movement and it had reappeared. Danielo quickly tossed it another Grasshopper and this time it hopped towards us and took its reward. Danielo held another Grasshopper that then seemed to transfix the bird. We obtained some photos and it even started to call in full view. Danielo put the Grasshopper down, it quickly hopped right in and then it was off, disappearing back behind the tree. Brilliant, we had seen the species that we had most wanted to see when planning our trip! It felt time for us to leave and we slowly walked back down the trail to the Chocolate Farm clearing without us seeing another bird! Danielo then left but we continued to watch from a small shelter a few birds arriving to feed on bananas put out for them. Also, a male Purple-chested Hummingbird put in several appearances at a flowering bush recommended by Alejandro the day before. When the rain eased we walked back through the cacao, but on reaching the forest trail, frustratingly, the rain started again. Reluctantly we returned to where we were staying to sit out the weather. Henri asked what species it was that had made us so ecstatic. We showed him the illustration in the field guide and he immediately pointed to the ridge-top above where we were staying. He even suggested that they made 'good eating'!! The weather brightened-up in the afternoon, so we walked back alongside the river to the Chocolate Farm , but there was little activity. 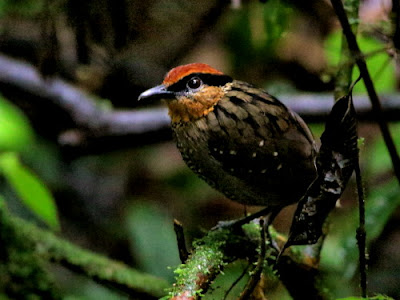 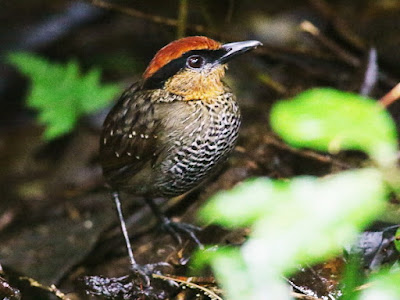 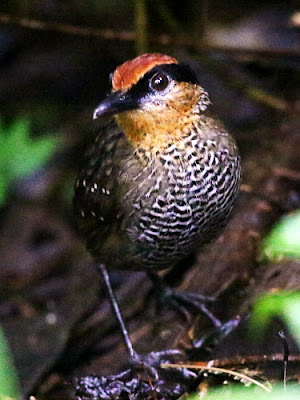 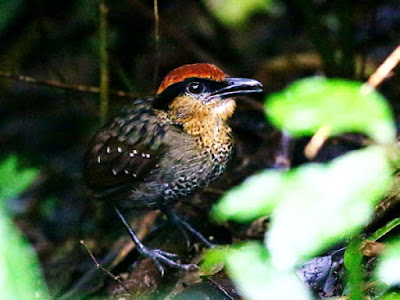 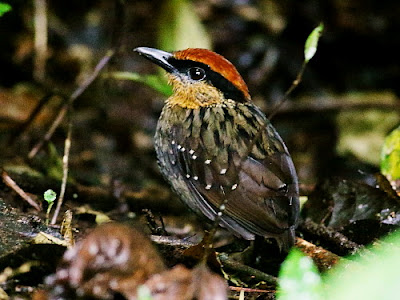 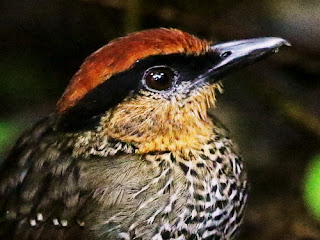 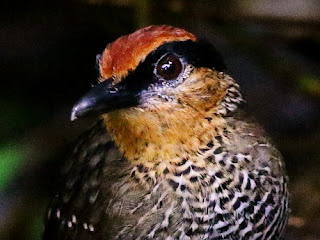 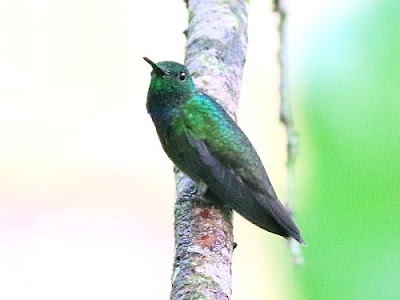 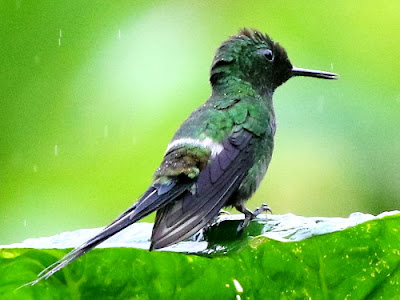 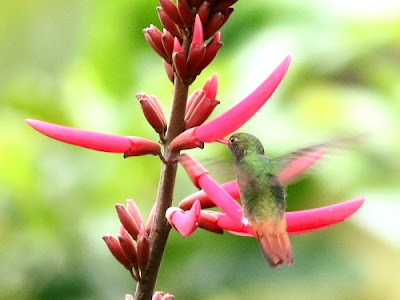 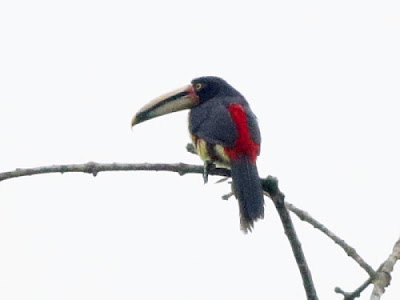 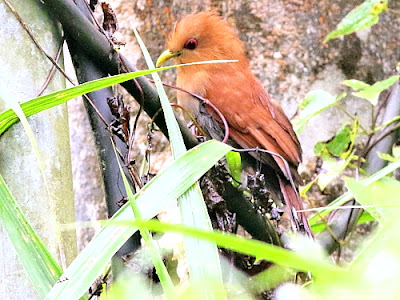 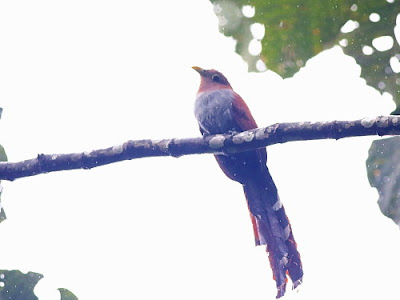 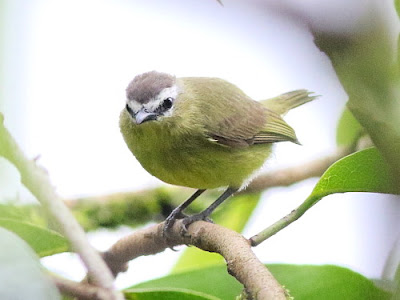 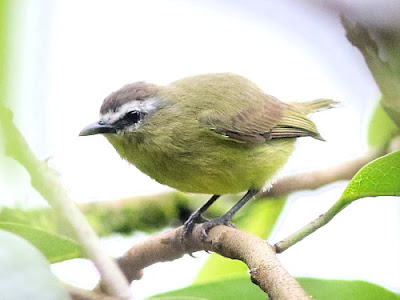 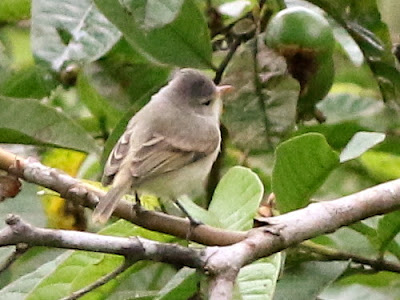 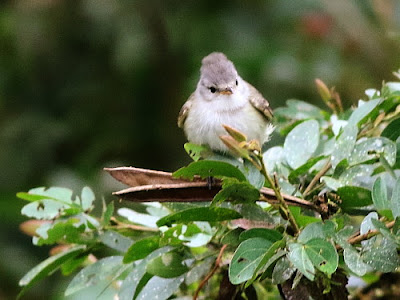 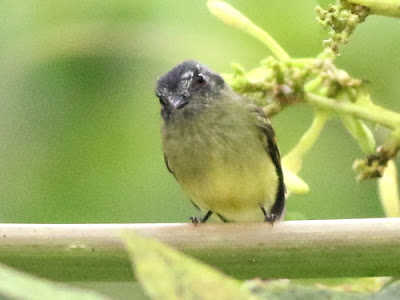 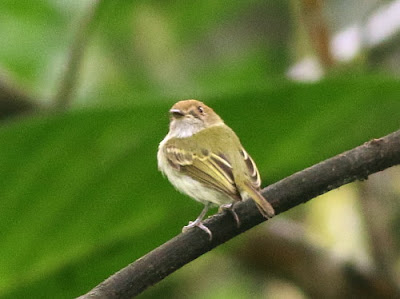 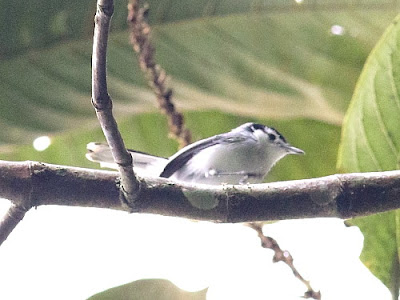 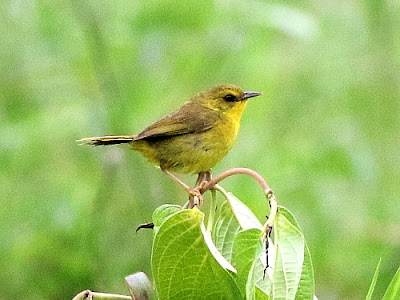 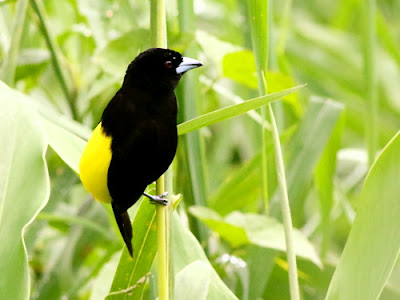 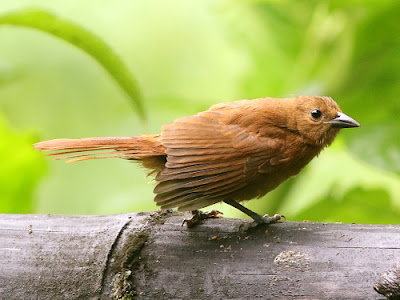 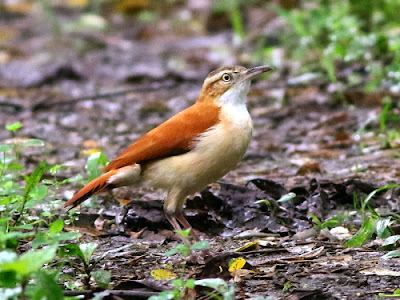 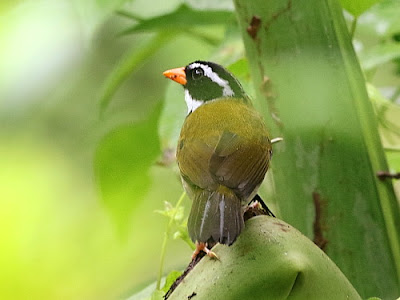 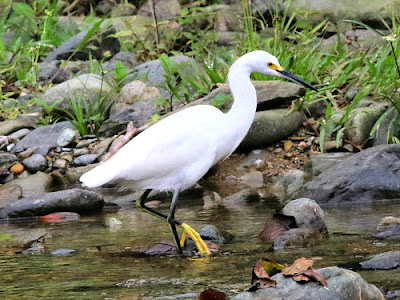 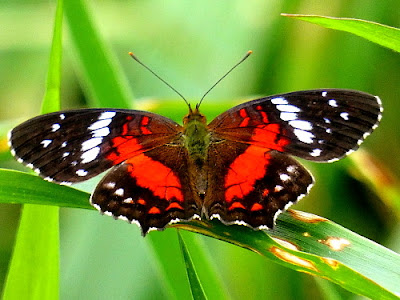