A late afternoon visit to Burrafirth revealed the continued presence of the Common Rosefinch but I then heard an Acro repeating a deep 'chet' call and then a series of churring 'trrrrr' alarm calls so it raised my hopes that it might be a Blyth's Reed Warbler. I then managed a very brief glimpse of it in flight but couldn't discern anything other than it appeared sandy-coloured in flight. By chance, Mike arrived but it proved incredibly skulking, being particularly inconsiderate of it as we were being eaten alive by a mushroom cloud of midges! However, we eventually nailed it - our second Marsh Warbler of the Autumn. A case of de-ja-vu as I'd heard a Marsh Warbler calling in the Spring at Valyie that sounded pretty much identical to and readily responded to playback of calls of BRW. 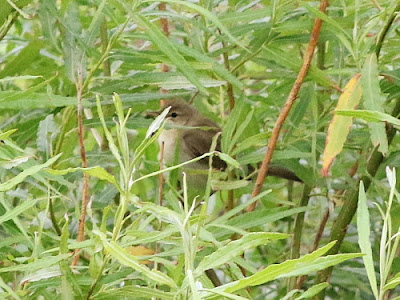