I spent 3 hours guiding two Americans hoping to record as many moorland species as possible. Just as we were finishing our walk and approaching my car parked along Holsens road a female Black-headed Bunting flew past us and thankfully landed in some rank grass but out of sight. Creeping closer, it unfortunately flushed but landed close to the cliff edge where I obtained a few poor images as I was looking pretty much directly into the light. It again flew and disappeared down the cliffs. I rather hastily said my farewells to the Americans, put the news out and collected Dante from doing his rounds at Haroldswick and we returned to the scene. It took us half an hour or so before we again found it feeding along the clifftops when it was also nice for us to hear it call if only the once. Dante obtained some superb images that he's kindly allowed me to include below... In the increasingly windy conditions I later took a walk around Norwick that produced a singing Willow Warbler and a Spotted Flycatcher. 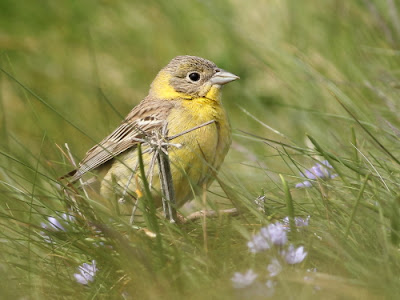 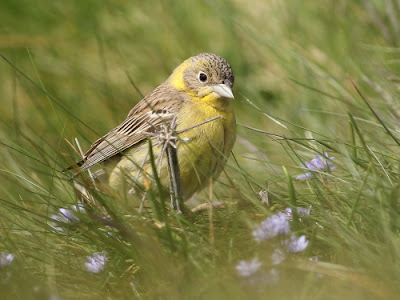 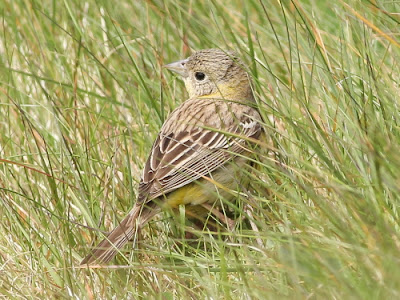 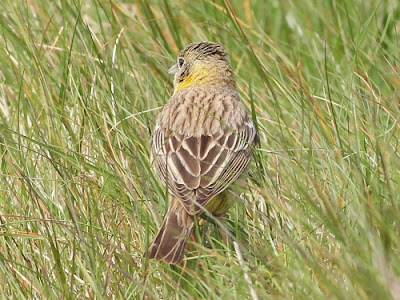 Female Black-headed Bunting along Holsen's road
(all images Dante Shepherd with more on Dante's blog here)
The fifth that I've been fortunate enough to find on Shetland (two in Spring and three in Autumn).
Posted by Hegura at 13:44
Newer Post Older Post Home