For a pleasant change there was plenty of early morning visible diurnal migration over Norwick with a few flocks of Meadow Pipits, Redwings, a Fieldfare, several flocks of Brambling and even 8 Goldcrests were seen to take to the air and fly as a loose flock inland from Valyie. Whilst this was nice to see it also likely resulted in what amounted to a very brief encounter with an Arctic Redpoll that flushed from the ground at Valyie with c.8 Redpolls that I took to be a small flock of Mealy Redpolls at the time. They all alighted in the sycamores and having only secured a few images of the Arctic the entire flock took flight calling but I anticipated/hoped that they would simply circle around before settling again. But there was a flock of c.20 Redwings flying overhead and inland at the time and much to my horror the Redpolls climbed-up into the sky to initially loosely associate with the Thrushes for a while before separating from them until I lost them as specks high in the sky heading towards Saxa Vord camp. Whilst at Valyie I also saw c.10 Robins, a Yellow-browed Warbler, the Common Rosefinch and 2 Little Buntings. Geoff & Robbie then very kindly helped us set a new window at our house that took a fair while during which time a Common Redstart, a Chiffchaff, 2 Blackcaps, a Goldcrest and a Blue Tit spent varying times in our garden and a few Brambling overflew. During the afternoon I headed for Lamba Ness seeing a Jack Snipe, 2 Bluethroats and another 10 Robins. Skaw added a Yellow-browed Warbler and 3 Chiffchaffs. 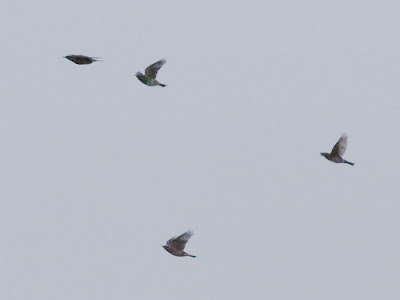 Redwings moving overhead from the off this morning 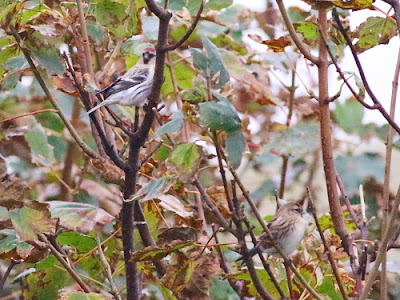 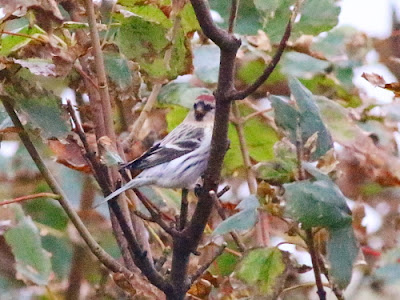 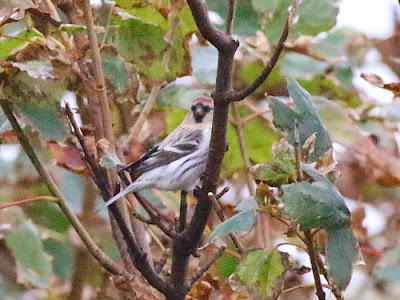 Arctic Redpoll at Valyie
Whilst the bird was immediately arresting when in flight among the other Redpolls by virtue of its large white rump and overall white ground-colour it didn't strike me as large as the recent Hornemann's Arctic Redpolls seen at Skaw and Burrafirth, and in fact, little different in size to the accompanying Redpolls - not that I paid them much attention with the brevity of the encounter - so perhaps they were Northwestern rather than Mealy Redpolls that would undermine my size assessment? Hopefully it will yet resurface on the island ... 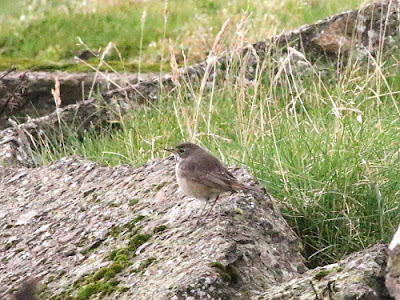 First-winter female Bluethroat at Lamba Ness
the other was a male
Posted by Hegura at 14:00
Newer Post Older Post Home