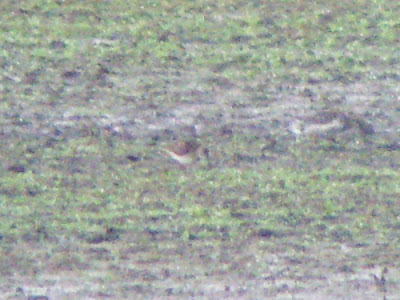 Considerably smaller than the accompanying Dunlin, the upperparts looked rather worn and faded lacking any hint of fresh bright fringes leading us to believe it an adult. In comparison with the Dunlin its upperparts appeared considerably more gingery and its cap was immediated noted as being clearly rufous-tinged (although whilst observing it we did not appreciate this feature was considered more indicative of adult Long-toed Stint per the Collins Guide). 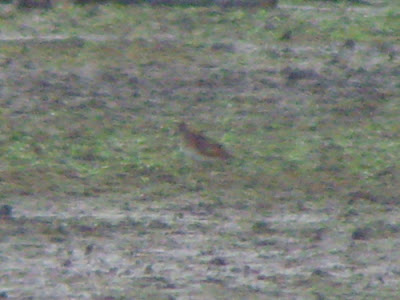 The colouration of the bird's rufous-tinged cap and orange-washed breast-sides are just discernable in this image. 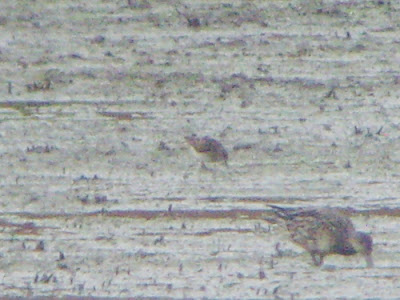 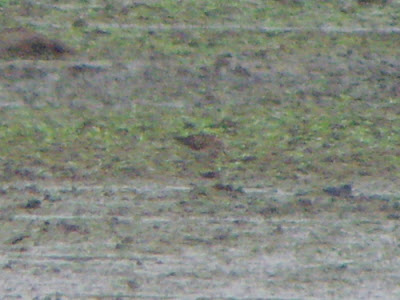 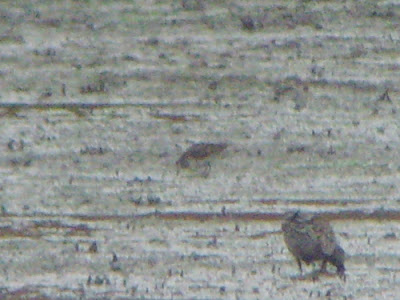 In the hour I watched the bird, whilst foraging, it typically appeared tiny, rather hunched, compact and had a horizontal carriage. Hence, what I would typically expect of a Least Sandpiper. The bird possessed a rather neat complete pectoral band contrasting with its white underparts. 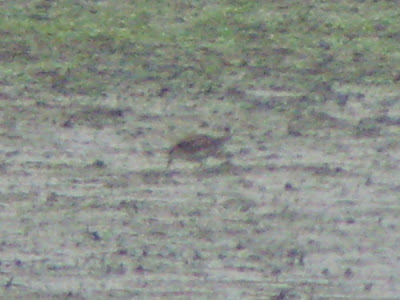 This image hints at the rather isolated dark ear-covert patch contrasting with rather diffusely-patterned paler lores and pale supercilium. 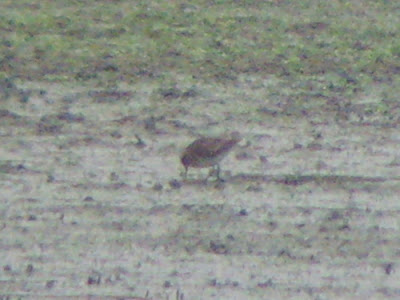 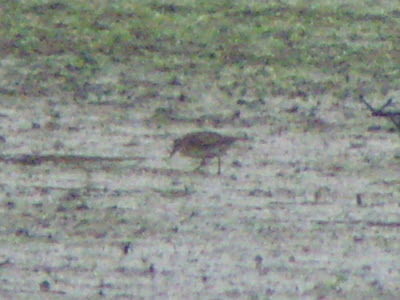 Slightly face-on the broad pale supercilia appear pronounced. Others also noted its rather curious manner of 'looking around'. It's interesting to compare its apparent forecrown pattern with the image sixth below this... 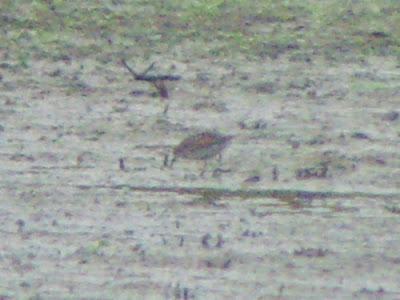 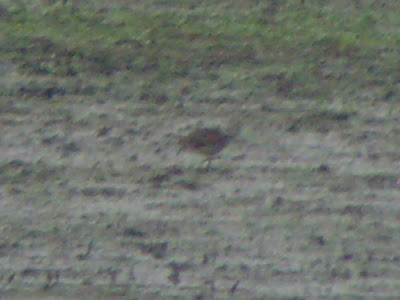 Obtained using a 3x digital zoom through a 30x scope comparison of toe length with bill length is not for the faint-hearted! 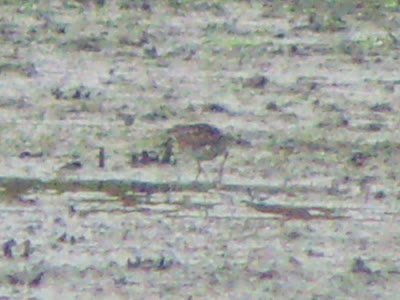 Its scapulars were clearly dark-centred and its legs appeared a dull 'dirty' yellowish. The upper scapulars appeared to have broad pale buff fringes uniting to form a broad mantle-V. This image is the first to hint at the true extent of the length of its tibia. 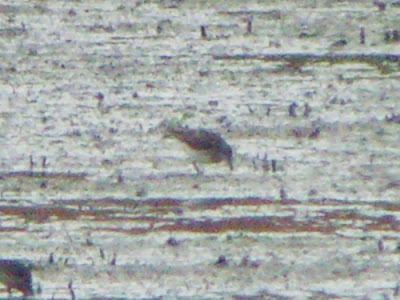 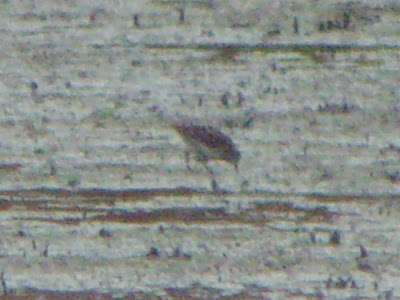 Either side of its neat pectoral band some isolated dark spots, on a white background, extended down onto its upper breast-sides. 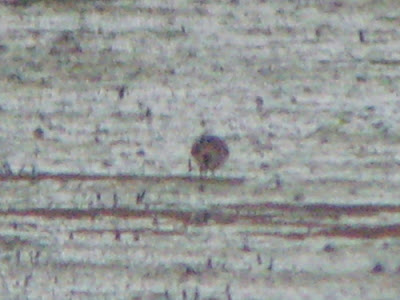 At the viewing range it was difficult to be confident, but we felt the rufous-tinged crown continued unbroken down to the bill as supported by this image. Hence, we could not see the pale supercilia bridging across the forehead at the base of the bill as often shown by Least Sandpiper, but we were also aware, that Least Sandpiper can be variable in this respect. 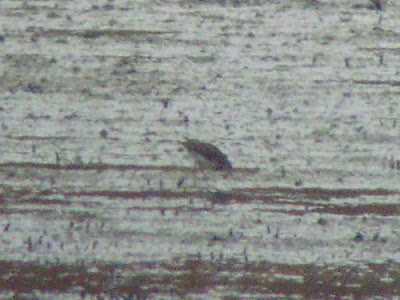 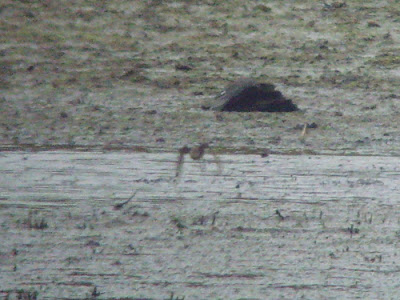 The sole time we saw it in flight it dangled its legs so we were unable to assess any foot projection beyond its tail. However, in this image, it does appear rather 'leggy'!
Burpham
Pallid Harrier 1 juvenile ex.
Hen Harrier 1 male
Common Buzzard c.12﻿ 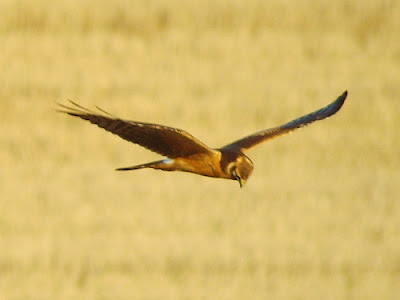 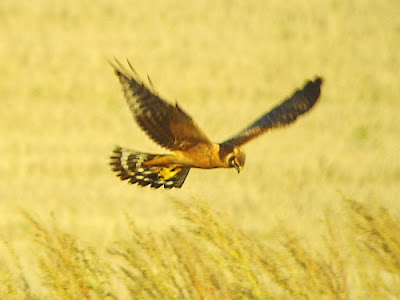 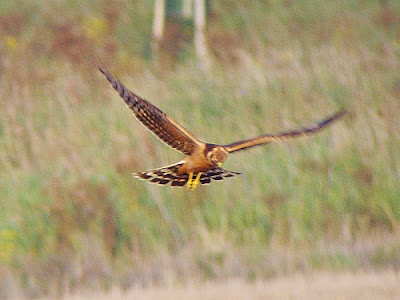 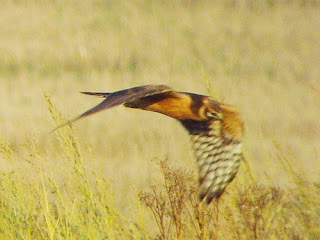 Juvenile Pallid Harrier at Burpham﻿
Posted by Hegura at 00:11