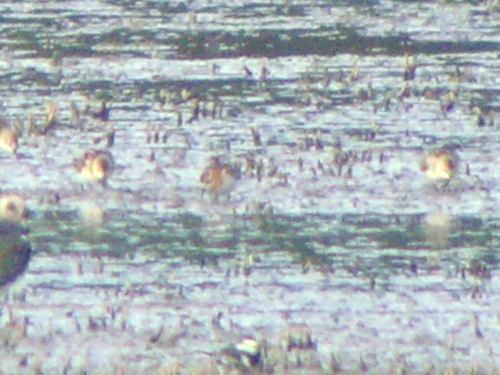 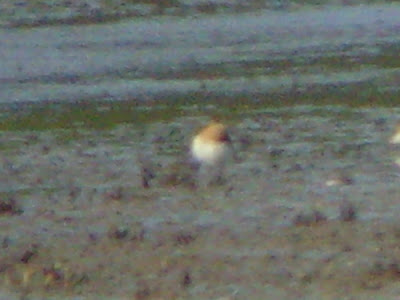 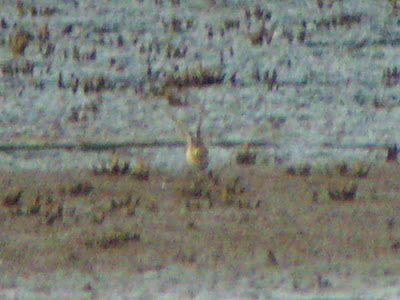 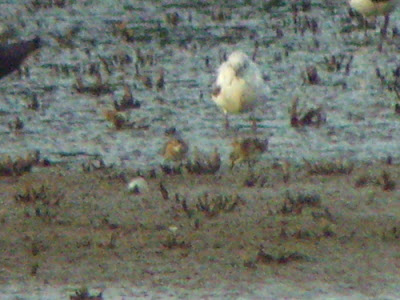 Worn adult and juvenile Little Stints at Weirwood Reservoir
A frustratingly distant adult Stint at Weirwood Reservoir. In my opinion, the orange colour of its neck sides and upper breast that extended onto its nape certainly recalled that of Red-necked Stint, and at the range seen, appeared unmarked and formed a neat pectoral band contrasting with its gleaming white underparts and distinctly white breast sides. Face-on, the black bill was set amidst white, that, again in my opinion, added to its 'appearance' of a Red-necked Stint. There appeared a few isolated black spots falling below the orange breast band, but this was right at the limit of observation so it was difficult to ascertain the exact pattern. Its white supercilium, diffuse eyestripe and white 'cheeks' certainly appear very similar to the moulting adult Red-necked Stint photographed in Cambridgeshire (Birding World Vol 14 No 9), albeit with a far more extensive white throat than that individual. It appeared shorter-legged than the accompanying juvenile Little Stints, but unfortunately, no more attenuated. It appeared very short-billed that also appeared rather fine and very slightly decurved. It also appeared the smallest Stint present, although interestingly, the Collins Guide gives the smallest length of Red-necked Stint as smaller than that for a Little Stint. It is worth comparing the plumage and structural similarities of Lars Jonsson's depiction of a worn summer plumage June/July Little Stint in Identification of Stints and Peeps (British Birds Vol. 77 No. 7) to the Weirwood bird.
Posted by Hegura at 14:12